Since 2015 World Bboy Battle has been organizing pro Breaking sports championship tournaments that are fair, clean and sportsmanlike.

Under a 100-point sports regulated scoring system, the athlete who scores the highest points in the championship matchup is crowned champion and recognized as the Best Bboy on Earth™ for the year.

WBB Founder Frankie “Sirswift” Hernandez is a Bboy pioneer and former pro Bboy who danced and toured with Run DMC and Afrika Bambaattaa in the early 80’s.

Since then, Frankie suffered over 30 years of frustration over Breaking organizers’ inability to provide fair competition to its athletes. And so his entrepreneurial spirit and passion for Breaking led him to create and develop World Bboy Battle, a professional Breaking sports tournament league whose foundation is based on fair play.

On January 25 of 2015, Frankie realized his vision when he launched the very first professional sports competition for Breaking at the Queens Theatre in NYC. It was called WORLD BBOY BATTLE #1.

Our mission is to grow our Breaking sport nationally and internationally by producing professional Breaking sports competitions where each competitor is entitled to fair competition, compensation and share of prize money, just like athletes in other pro sports.

Now that Breaking is an Olympic sport added to the Paris 2024 Games, it’s vital World Bboy Battle grow this sport in the U.S. to provide a positive impact among our nation’s poverty stricken youth.

Only with your support, can we grow our Breaking sport where our youth can one day receive all the benefits of sport which include improvements in their academics, health and fitness. Like and share our pages. Your support can make matters.

At the core of Breaking sports is the Bboy culture which promotes great sportsmanship, camaraderie and fun. And the greatest beauty of Breaking is that it unites all people and crosses all boundaries.

Breaking has reached the world’s Biggest sports stage—Paris 2024 Olympics—because of its five million Breakers, their great sportsmanship, the support and camaraderie of the International Bboy community, and the resiliency of the Bboy culture refusing to fade into the abyss and die out. 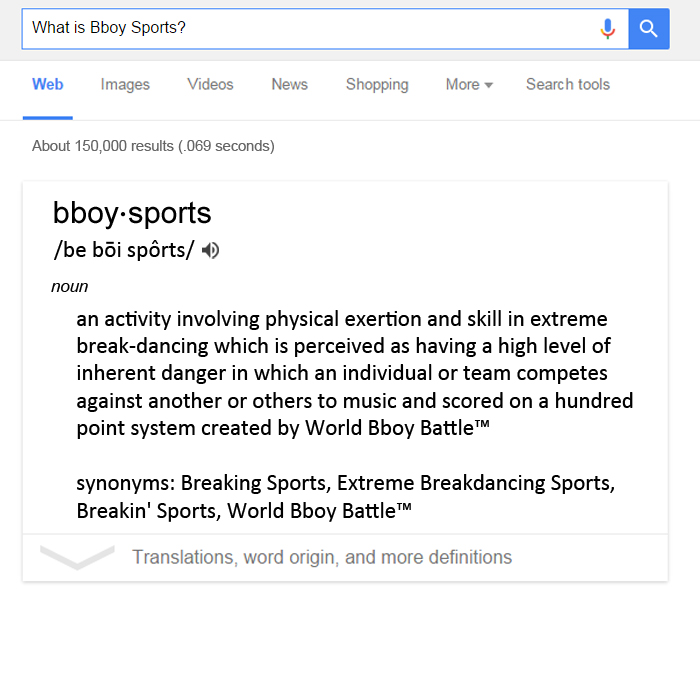 WORLD BBOY BATTLE IN THE NEWS